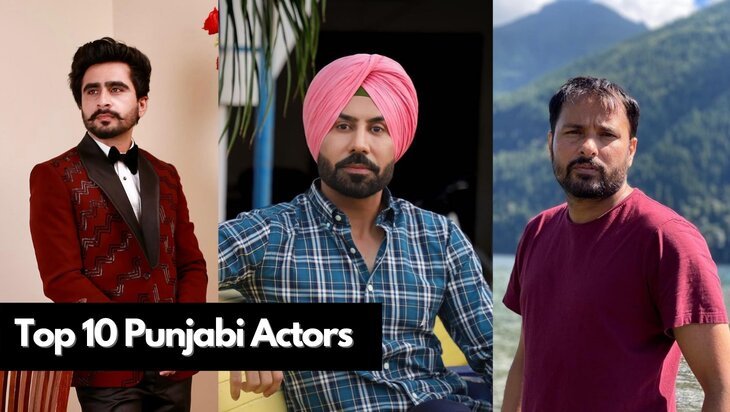 Here is a list of the Top 10 Punjabi Actors

Jagjeet Singh Sandhu is an Indian film actor and theatre artist who works in Punjabi cinema. He is born on 08 June 1991 and his birthplace is Village Himmatgarh Chhanna village, Amloh, Fatehgarh Sahib, Punjab, India. He got his first Punjabi feature film ‘Rupinder Gandhi’ in which his role as Bhola, struck big with audiences. Then he got the role of ‘Speed’ in my second film Qissa Panjab brought me critical acclaim as well as international recognition. Read More

Jaswinder Singh Bhalla is a Punjabi actor, comedian, and Professor. He did his Ph.D. in Agriculture Science from Punjab Agricultural University and is a full-time professor at PAU as well. In 1988, he started a professional career along with co-performer Bal Mukund Sharma with the audio cassette ”Chhankata 1988”. He started his professional career as a comedian in 1988 with Chankata 88 and became an actor in the film Dulla Bhatti (1998). Read More

Binnu Dhillon is a Punjabi actor and comedy associated with Punjabi Flim Industry. Dhillon hails from Dhuri, Sangrur, Punjab, where he did his schooling at Guru Teg Bahadur Public School. He began his career as a Bhangra performer and had an opportunity to perform at the Indian Festivals in Germany and the UK, he appeared in television and serials before he entered the acting field. He continued to act in plays during his time at the university as a student and as part of the theatre and television department’s repertory too. Read More

Gurpreet Ghuggi is an Indian actor, comedian, and politician. He began his career by acting in theatre in the early 1990s, after which he had recurring roles in television series such as Ronak Mela and the soap opera Parchhaven. He gained international public recognition with comedic leading roles through his videos Ghuggi Junction (2003) and Ghuggi Shoo Mantar (2004). He starred in the film Carry On Jatta (2012) and was praised for his meaningful leading role in Ardaas (2015). Read More

Ammy Virk is a Punjabi Singer, lyricist, and producer associated with Punjabi Flim and Music Industry. He is best known for playing the role of Nikka in Nikka Zaildar, Shivjit in Qismat, Harjeet Singh in Harjeeta, and Hakam in Angrej.

Jimmy Sheirgill is an Indian actor and film producer who works in Hindi and Punjabi films. Sheirgill began his film career with the 1996 thriller Maachis. His breakthrough came with the blockbuster musical romance Mohabbatein (2000), which became the highest-grossing Bollywood film of the year, following which he starred in several other box-office hits including Mere Yaar Ki Shaadi Hai (2002), Munna Bhai M.B.B.S (2003), A Wednesday (2008), Tanu Weds Manu (2011), Special 26 (2013), and more.

Gippy Grewal is an Indian actor, singer, film director, and producer whose works span the Punjabi and Hindi film industries. His single ”Phulkari” broke many records in the Punjabi music industry. He made his acting debut in the 2010 movie, Mel Karade Rabba, which he followed with Carry On Jatta, Lucky Di Unlucky Story, Bhaji in Problem, and Jatt James Bond. He revived the “PTC Best Actor Award” in 2011 for his performance in the 2011 film Jihne Mera Dil Luteya.

Dev Kharoud is a Punjabi Actor and Comedian associated with Punjabi Flim Industry. He was born in a Sikh family on 22 April 1990. He started his career as a theatre artist and played various roles on stage under the direction of theatre legends like Balraj Pandit, and Rajesh Sharma. He also appeared in the title role of the movie ”Rupinder Gandhi The Gangster”, a blockbuster movie of the year 2015, and later in its sequel ”Rupinder Gandhi 2 The Robinhood”. He played the lead role in Dakuan Da Munda.

Amrinder Gill is a Punjabi Singer, Actor, Producer, and Lyrics associated with Punjabi Flim & Music Industry. He is born on 11 May 1976  and his birthplace is Boorchand, Amritsar, Punjab He has been nominated for ten PTC Punjabi Film Awards, winning six including three for Best Actor, and two for Best Playback singer and has been nominated for five Filmfare Awards, winning two for Best Actor and Best Playback singer.

Diljit Dosanjh is a Punjabi singer, actor, and television presenter associated with the Punjabi and Hindi Flim Industry. He was born on born 6 January 1984 and his birthplace is Village Dosanjh Kalan, Jalandhar, Punjab. He also acts in Punjabi movies, with many of them being notable hits, including Jatt & Juliet, Jatt & Juliet 2, Punjab 1984, Sardaar Ji, Ambarsariya, Sardaar Ji 2, Super Singh, Soorma, Sajjan Singh Rangroot, and Shadaa which are among the most successful Punjabi movies in history.