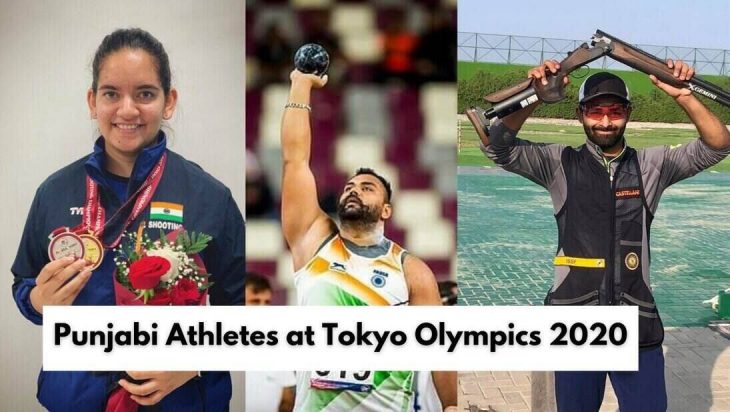 India’s Olympic contingent for Tokyo 2020 Olympics includes 127 participants from 18 sports. In the 2016 Rio Olympics, 117 Indian athletes participated (63 men and 54 women) across 15 sports. A total of 15 athletes from Punjab across 4 sporting categories have so far qualified in the final squad by their respective federations for the Tokyo Olympics starting on July 23.

Here is the Punjabi Athletes list appearing at Tokoyo Olympics 2020

Harmanpreet Singh, born on 6 January 1996 plays as a defender in the Indian team. He was part of the 2016 Olympics squad and this will be his second Olympics.

Rupinder Pal Singh, born on 11 November 1990 plays as a fullback and is considered to be one of the best drag flickers in the world. He made his international debut in 2010 at the Sultan Azlan Shah Cup. The 31-years-old was the vice-captain of the team at the 2014 Men’s Hockey World Cup and this will be his second Olympics after the first one at Rio.

Hardik Singh, born on 23 September 1998 plays as a midfielder in the Indian team. He was the vice-captain of the Indian junior team and was roped in to play for the senior national team in 2018 at the Asian men’s hockey Champions trophy and also played the world cup in the same year. This will be the Olympic’s debut in Tokyo.

Manpreet Singh Sandhu, born on 26 June 1992 is the captain of the Indian hockey team at the Tokyo Olympics. He made his international debut at the age of 19 and plays as a halfback in the team. He has represented India in 2012, 2016 Olympics, and this will be his third One.

Shamsher Singh, born on 29 July 1997 plays as a forward in the Indian team. He became the first hockey player from Attari, Amritsar to represent an Indian Olympic hockey team. Tokyo Olympics will be his first major tournament and debut at the Olympics too.

Dilpreet Singh, born on 12 November 1999 plays as a forward in the Indian team. The 21-years-old senior national debut came at the 2018 Champions trophy, at which India won silver and was also part of the bronze medal-winning team at the 2018 Asian games. He will be making his Olympics debut in Tokyo.

Gurjant Singh, born on 26 January 1995 plays as a forward in the Indian team. The forward was also part of the 2016 junior world cup winning team and made his senior international debut in the 2017 Asia Cup at Dhaka. The 26-years-old will be making his Olympics debut.

Mandeep Singh, born on 25 January 1995 plays as a forward in the Indian team. He made his senior international debut at the 2013 Hockey World league, and he is a very experienced player making 159 appearances for India. This will be his second Olympics.

Gurjit Kaur, born on 25 October 1995 plays as a defender in the Indian national women’s hockey team and also the crucial drag-flicker. In 2017, she made her senior international debut, and in the next year, she scored 8 goals at the 2018 Hockey World cup. The 25-years-old will be the vital player with drag flicks at her debut Olympics.

Anjum Moudgil born on 5 January 1994 is a sport shooter who will be representing India in 50m Rifle 3 position and 10m Rifle mixed team at Tokyo Olympics. She won two silver medals in the 2019 world championships, one in 10m air rifle and another one in 10m air rifle team. This will be her Olympics debut in Tokyo.

Angad Veer Singh Bajwa born on 29 November 1995 is a sport shooter who will be representing India in skeet at Tokyo Olympics. He won a gold medal in the men’s skeet in the Asian shooting championships which also earned him the quota for Tokyo Olympics.

Simranjit Kaur born on 10 July 1995 is an amateur boxer who will be representing India in the 60kg category at Tokyo Olympics. Earlier, she had won a bronze medal in the 2018 World Championships and this will be her Olympics debut in Tokyo.

Kamalpreet Kaur born on 4 March 1996 is a field athlete who will be representing India in the discus throw at Tokyo Olympics. She qualified for the Tokyo Olympics with a national record attempt of 65.06m during the athletic federation cup in Patiala.

Tajinderpal Singh Toor born on 13 November 1994 is a field athlete who will be representing India in the shot put at Tokyo Olympics 2020. Earlier in 2018, he won a gold medal in the 2018 Asian games with a national record throw of 20.75m. This will be his Olympics debut in Tokyo.